Colin David Reese was born in 1950 in London.  The son of celebrated radio actor, Harold Reese, he was immersed in the theatre world from his earliest years. His first appearance on stage was at the age of 5, his first professional appearance at 12, in a musical fantasy “All The King’s Men” about the life of (of course) Shakespeare, as his illegitimate son.  Shakespeare was always present in the family home; quotes, misquotes, aphorisms, references, anecdotes - all providing part of the routine daily conversation.  Indeed his nickname at grammar school was inevitably – Shakespeare.
On leaving school in 1967, Colin immediately went into the professional theatre, at Plymouth where he performed in a number of plays during the season, including Romeo and Juliet, directed by Joan Knight.  A number of other regional contracts followed, leading to a role in 1968 for an 18 month run as one of the boys in Alan Bennett’s “40 Years On” at the Apollo Theatre in London, starring Sir John Gielgud, Paul Eddington, Alan Bennett and directed by Patrick Garland.  Backstage conversations often turned to Colin’s favourite subject and the delight of an 18 year old at being so close to perhaps the greatest Shakespearean actor of the century is easy to imagine.
The usual life of a young working actor, small parts in TV productions, tours, pantomimes occupied the next few years – then a part in Christopher Hampton’s “The Philanthropist” starring Nigel Hawthorne at the MayFair Theatre for 15 months.  This allowed Colin to save the money necessary to realise his ambition to undertake a fully professional training at the world famous Webber Douglas Academy of Dramatic Art in London where he graduated in 1975.  The training is justly renowned and gave him the grounding in all aspects of acting, with particular emphasis on the classics.  Straight to Canada where he worked for three years in Edmonton (Alberta) and Kamloops (BC).  In 1978 he took a year off to travel - Israel, Greece, Yugoslavia, Italy, France, returning to London to continue his career.
From 1979 to 1990 he worked in many different aspects of the profession, notably a 7 month run in 1985 at the Haymarket Theatre in Tennessee Williams’ “Sweet Bird of Youth” directed by Harold Pinter and starring Lauren Bacall.  It was in this year that he also started his own company – Jericho Theatrical Productions, specifically to mount a production that he had compiled with his father; “A Lover and His Lass” – a two-handed compilation of love scenes from Shakespeare.  This was performed in many small theatres and in community centres around Britain, bringing to many people their first taste of Shakespeare in performance.  It was doing the research for this production that the real obsession began.  How could these scenes, out of the context of their plays, stand alone?  Research into the Elizabethan Theatre gave the answer but opened another, larger question.  150 plays a year, access to cue-scripts only, how could the players have managed to perform and be as successful as they were?

Dulwich College in London, a school founded by Edward Alleyn, one of Shakespeare’s contemporaries, contains an unusual series of documents from the period.  Including a cue-script and a plot sheet.  Colin went to study them.  Standing in the school library with a cue-script in one hand and a plot sheet in the other, a shiver ran down his spine.  “As an actor, I could see how it worked.”  Prove it!  By chance he met Patrick Tucker, who at the time was running workshops on the acting of Shakespeare’s verse.  John Barton had also just published a book on the same subject.  Both had come to the same conclusions, but there was an element missing.  More research into the history of British theatre before Shakespeare finally provided the answer:  Comedia dell’ Arte.  Elizabethan actors were working in the same way as the Italian masters of the most successful theatrical form ever, a form which lasted almost unchanged for about 300 years. The influence of Comedia on Shakespeare’s writings is highly visible. Where to study Comedia dell’ Arte?  The only two serious practitioners were Georgio Strehler in Milan and Jacques Lecoq in Paris.
In 1990, at the age of 40, Colin went to Paris to spend 2 years as a student at the Ecole Internationale du Théâtre with Jacques Lecoq.  He still lives in France with his two children and runs “La Compagnie du Cèdre” a professional theatre company. 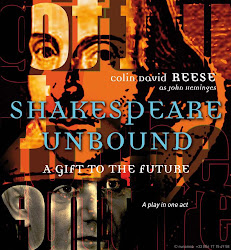 “SHAKESPEARE UNBOUND – a Gift to the Future” is available for national touring.